The 2016 presidential election campaign may always be remembered for the proliferation of fake news stories. Viral news hoaxes have been around for many years, but 2016 is the year they exploded into the consciousness of the American public. Evaluating information has never been more important.

The weekend after the Presidential Election, Melissa Zimdars, a professor at Merrimack College, learned that the top result returned by a Google search about the election's popular vote was to an article claiming that Trump carried the popular vote. Not true. Hillary Clinton had over one million more votes than Trump at the time (and eventually, more than 2.5 million, while many fake news sites continued to report the contrary). This article was on an untrustworthy news site and caused Professor Zimdars to compile suggestions on how to spot a fake news site.

Fake News is a Real Problem

The chart shows headline/publisher text in the first column and number of Facebook engagements in the second column.

Headline: "IT'S OVER: Hilary's ISIS Email Just Leaked & It's Worse Than Anyone Could Have Imagined" Publisher: Ending the Fed

According to Professor Zimdars, fake news can be broadly categorized as follows:

CATEGORY 1: Fake, false, or regularly misleading websites that are shared on Facebook and social media. Some of these websites may rely on “outrage” by using distorted headlines and decontextualized or dubious information in order to generate likes, shares, and profits.

CATEGORY 2: Websites that may circulate misleading and/or potentially unreliable information

CATEGORY 4: Satire/comedy sites, which can offer important critical commentary on politics and society, but have the potential to be shared as actual/literal news

No single topic falls under a single category - for example, false or misleading medical news may be entirely fabricated (Category 1), may intentionally misinterpret facts or misrepresent data (Category 2), may be accurate or partially accurate but use an alarmist title to get your attention (Category 3) or may be a critique on modern medical practice (Category 4.) Some articles fall under more than one category.  It is up to you to do the legwork to make sure your information is good.

See also 6 types of misinformation circulated during the 2016 election season from the Columbia Journalism Review.

How do you know?

1. You can't verify its claims

A fake news article may or may not have links in it tracing its sources; if it does, these links may not lead to articles outside of the site's domain or may not contain information pertinent to the article topic.

Fake news plays on your feelings--it makes you angry or happy or scared. This is to ensure that you won't do anything as pesky as fact-checking

Most authors aren't even journalists, but paid trolls.

4. It can't be found anywhere else

If you look up the main idea of a fake news article, you might not find any other news outlet (real or not) reporting on the issue.

Did your article come from abcnews.com.co? Or Realnewsrightnow.com? These and a host of other URLs are fake news sites. 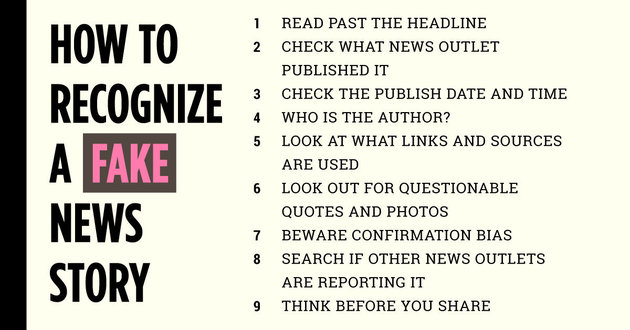 How to Recognize a FAKE news story 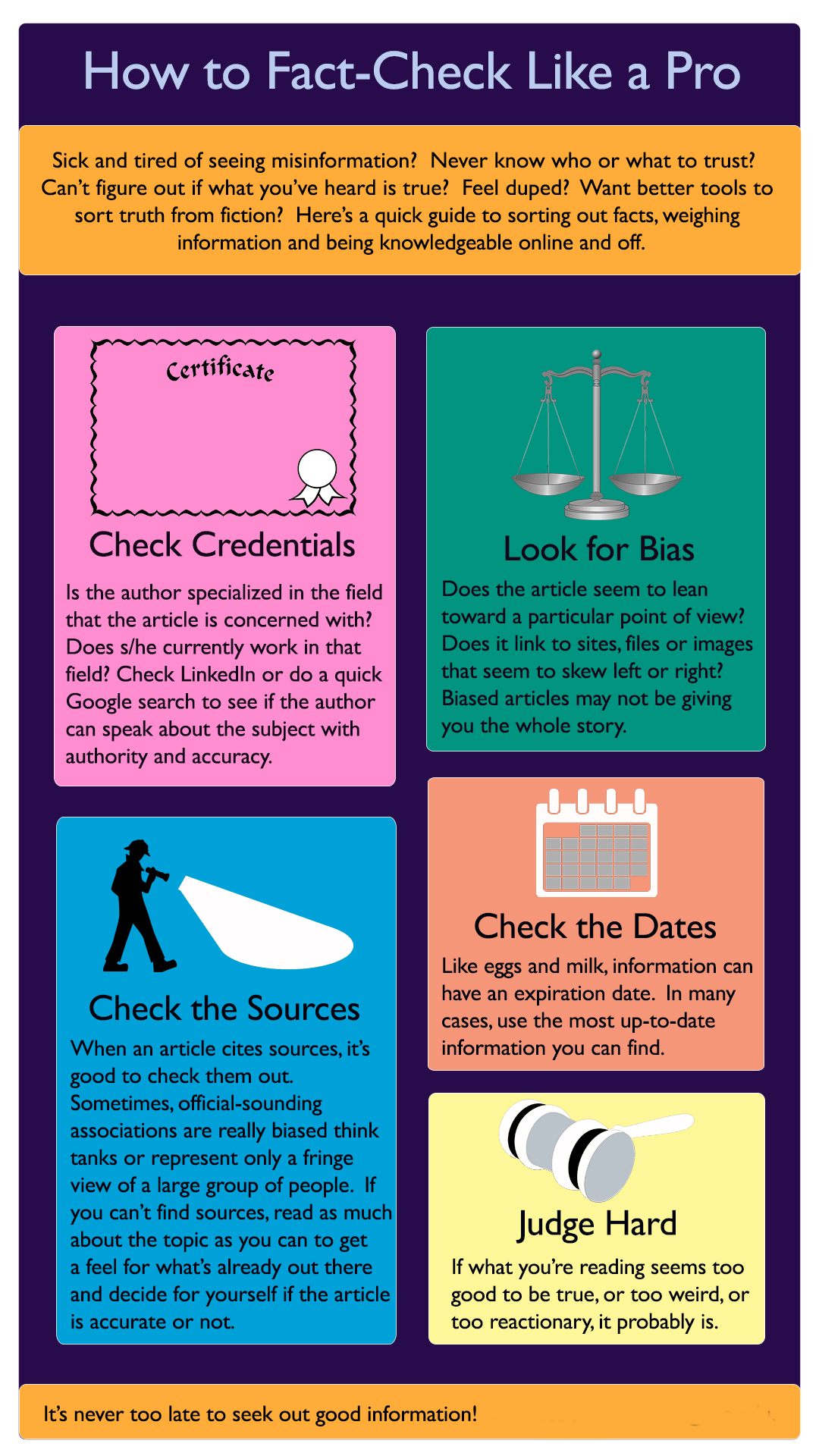 Sick and tired of seeing misinformation? Never know who or what to trust? Can't figure out if what you've heard is true? Feel duped? Want better tools to sort truth from fiction? Here's a quick guide to sorting out facts, weighing information and being knowledgeable online and off.

Is the author specialized in the field that the article is concerned with? Do they work in that field? Check LinkedIn or do a quick Google search to see if the author can speak about the subject with authority and accuracy?

When an article cites sources, it's good to check them out. Sometimes official-sounding associations are really biased think tanks or represent only a fringe view of a large group of people. If you can't find sources, read as much about the topic as you can to get a feel for what's already out there and decide for yourself if the article is accurate or not.

Does the article seem to lean toward a particular point of view? Does it link to sites, files, or images that seem to skew left or right? Biased articles may not be giving you the whole story.

Like eggs and milk, information can have an expiration date. In many cases, use the most up-to-date information you can find.

If what you're reading seems too good to be true, or too weird, or too reactionary, it probably is.

It's never too late to seek out good information!